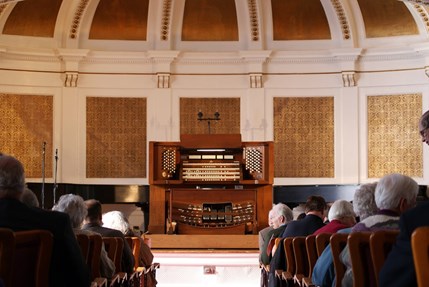 The Van Looy Series is named in honor of Ellen Van Looy Reed ’53. Ellen’s mother, Priscilla Van Looy, donated the total cost for the rebuilding of the console and relays of the Moller organ.

Concerts will be held in Thomson Hall’s Alumnae Chapel at Wilson College.

Tickets are $7, children under 16 and Wilson students/faculty/staff are free. Complimentary reception to follow in Lenfest Lobby.

To invoke an old Southern expression, Bradley Hunter Welch plays the organ like nobody's business. With the virtuosity of the playing and the easy going spoken commentary, he quickly proves that entertainer and organist are not mutually exclusive. Hailed as “A world-class virtuoso” (The American Organist) and “an expert at defining darks, lights, shadows and colors,” (Birmingham News, Alabama) Dr. Welch is increasingly in demand as a recitalist, concerto soloist, and collaborative artist. A native of Knoxville, TN, Bradley holds the Doctor of Musical Arts, Master of Musical Arts, and Master of Music degrees, as well as the coveted Artist Diploma from Yale University. He also holds the Bachelor of Music degree magna cum laude from Baylor University. Dr. Welch is the 2003 First Prize winner of the Dallas International Organ Competition and, in addition to concertizing, serves as Resident Organist at the Meyerson Symphony Center in Dallas and as Artist-in-Residence at Preston Hollow Presbyterian Church, Dallas. 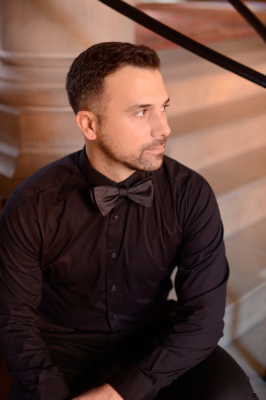 Equally accomplished as both organist and scholar, Russell Weismann is an emerging young artist whose achievements in performance and academic spheres have earned him international acclaim among audiences and intellectuals alike. A native of Pittsburgh, Pennsylvania, Russell holds the Doctor of Musical Arts degree from George Mason University. Additionally, Russell completed the Master of Music degree from Yale University and the Bachelor of Music degree cum laude from Duquesne University while earning a certificate of study from the Yale Institute of Sacred Music. As an organist, Russell has performed recitals across the United States, as well as in Europe, Central America, and Africa. An active member of the American Guild of Organists, Russell successfully achieved the Guild’s Associate, Colleague, and Service Playing certificates, and has served as Past-Dean and sub-Dean of the District of Columbia Chapter as well as a member of the Guild’s National Board for Membership Development. Among his many community outreach efforts, Russell is in his fourth year as Artistic Director of "Music @ the Monastery," a thriving musical event series held at the Franciscan Monastery in Washington, D.C., and director of the Capital Organ Studio, a regional based initiative offering private music lessons to students of all ages and abilities. Russell is currently the Director of Music and Organist at Georgetown University.

For more information about tickets or to be placed on the mailing list for brochures, call 717-262-2003 or email conferences@wilson.edu