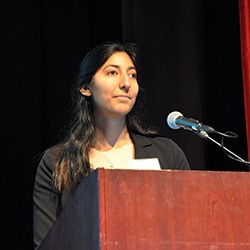 The use of fecal DNA as a tool for ungulate conservation has been validated for several threatened species, but with mixed success. Degradation and low DNA concentrations challenge its reliability for use in genomic research. This study assessed validity and integrity of fecal DNA for two critically endangered ungulate species. Over six weeks, DNA was collected, isolated and analyzed from fecal samples of Scimitar-horned oryx (Oryx dammah dammah, n=7) and Dama gazelle (Nanger dama ruficollis, n=4) at the Smithsonian Conservation Biology Institute. One set of fecal samples was processed fresh; two additional sets were incubated (40 ˚C) to simulate effects of heat degradation. DNA was isolated from all samples using QIAGEN’s MO BIO PowerFecal© DNA isolation kit, and sample purity for all three treatments (fresh, 24h, 1 week) was tested using a NanoDrop™ Spectrophotometer. DNA quality was analyzed using PCR and gel electrophoresis to amplify two primers: Cytochrome-b (421bp) and a control region fragment (560bp). DNA isolated from fecal samples was of sufficient purity for utilization in further analyses. There was no significant difference between DNA purity in fresh or incubated treatments for either O. dammah dammah or N. dama ruficollis. Fragment amplification was successful for both species.  Cytochrome-b produced stronger amplification of O. dammah dammah DNA, while the control region fragment proved slightly more effective with N. dama ruficollis DNA. These results suggest that species-specific genomic DNA can be isolated from O. dammah dammah and N. dama ruficollis fecal samples (Cytochrome-b and control region), and short-term heat exposure does not necessarily undermine the utility of this DNA for genomic analyses. 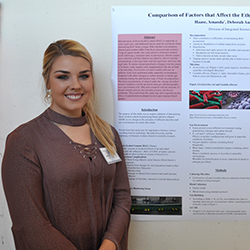 Determination of blood alcohol content (BAC) is important in some legal cases, and additional factors must be considered when determining BAC from a corpse. Ethyl alcohol concentrations detected post-mortem differ from those measured ante-mortem. Using an equine model, this study aimed to determine ethanol levels following a simulated state of putrefaction. Blood samples were collected and then ethanol was added in vitro to simulate concentrations at the legal limit, half the legal limit and twice the legal limit. To mimic normal putrefactive changes over the course of 24 hours, some samples were supplemented with one or both of the microbes, Escherichia coli and Candida albicans. In addition, trials were performed under anaerobic environments, blanketed with either nitrogen or carbon dioxide, to mimic gas conditions during the putrefaction stage of body decomposition. The final concentrations of ethanol under the varying microbial and gas conditions will be measured using gas chromatography–mass spectrometry (GC-MS) and compared with the amounts of ethanol initially present, the microbes present and the gas conditions. The results from this study may aid in quantifying the effects of putrefaction on ethanol levels in post-mortem blood samples. 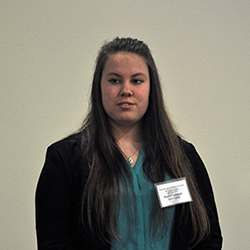 The number of microbreweries−breweries that produce a limited amount of beer−has grown 15 percent since 2015 and now makes up 12 percent of the beer industry, according to the Brewers Association. These breweries are growing in popularity all over the world due to their small batch sizes, attention to detail and individualized flavor profiles; however, they are at increased risk for contamination by microbes due to limited resources and increased human manipulation of the product. This poses a problem economically because spoiled beer decreases profit. Brewing begins by malting grains, which are then boiled. After boiling, hops are added to the same tank. The liquid is then cooled and transferred to a fermentation tank, where yeast is introduced. After fermentation, the fluid portion goes to a conditioning tank, where it stays until bottling, kegging or tapping. Lactobacillus and Pediococcus are Gram positive, anaerobic bacteria that most commonly spoil beer, making it unpalatable with an unfavorable aroma. These spoiling bacteria can contaminate the beer at multiple points during the brewing process. For this study, samples were collected throughout the brewing process, particularly at points of transfer within a local microbrewery−Roy Pitz in Chambersburg, Pennsylvania. Two beer products, a lager and an ale, were sampled. Samples were cultured in Hsu’s Lactobacillus Pediococcus medium, an agar that inhibits the growth of yeasts and selectively grows Lactobacillus and Pediococcus at 37°C, for a total of three days. Lagers and ales require different processing temperatures; therefore, microbial growth in these two types of beer was of particular interest. The ability to identify any specific points of bacterial contamination would allow the brewer to evaluate existing protocols, enhancing the quality of their products.

“The Effects of Probiotics on Canine Weight and Fecal Fat Content”

Obesity is a global and a national epidemic that affects nearly 37% of U.S. adults. According to the National Institutes of Health (NIH), obesity is now the second-leading cause of preventable death in the U.S. and is responsible for an estimated 300,000 deaths per year (2015). Obesity is a metabolic disorder that has a variety of causes; however, the most common is an imbalance of energy intake and expenditure. Obese adults are predisposed to developing a number of diseases, such as cardiovascular disease, Type 2 diabetes, hypertension and osteoarthritis. These adults may also experience a decreased lifespan and an overall lower quality of life. Studies in animals and humans have demonstrated that the gut microbiota and several metabolic disorders, including obesity, have a positive correlation. Restoring the beneficial microbiota population by adding probiotics into one’s diet may aid in weight loss. In this study, a controlled population of whippets from the Wilson College Veterinary Medical Center were utilized to minimize breed variables. All dogs were housed in the same environment, fed the same diet, and received the same amount of daily exercise. The initial weights of the dogs were recorded. Fecal samples were analyzed using the Van de Kamer method to establish baseline fat content. A probiotic capsule was administered to the treatment group once a day at the morning feeding for 13 consecutive weeks. The weights of the whippets and the fat content of fecal samples were determined every two weeks for five months. Preliminary results suggest that weight loss can be achieved by taking a probiotic pill and that age affects fatty acid content in feces. Probiotics may provide a possible naturopathic treatment alternative that is non-invasive and cost-effective for the control of obesity in humans.