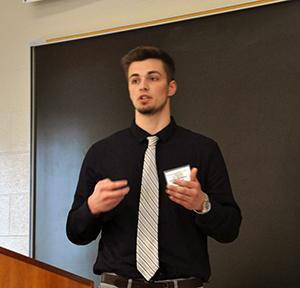 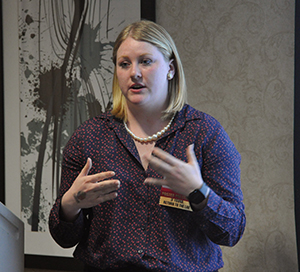 Previous research has been conducted on the relationship between bacteria and algae within lakes, and demonstrated a positive correlation between bacterial growth and algae mats as a type of biofilm. Biofilms are heterogeneous mixtures of microorganisms such as bacteria and algae that are held together by Extracellular Polymeric Substance (EPS). A free-flowing, freshwater system is a unique environment in comparison to a stagnant system. Many environmental factors can impact the aquatic system as it proceeds downstream from the headwaters. This then affects biofilm growth within the system to varying degrees. The purpose of this study was to characterize populations of microorganisms within a biofilm collected from a creek, and determine how the growth of those organisms was affected over time and with temperature changes. Five sample sites were used along the Conococheague Creek in Southcentral Pennsylvania, beginning 11.9km from the headwaters and ending 29.6km downstream from the headwaters. The factors examined in this experiment included ambient air and water temperature, Gram positive and negative bacteria, and photosynthetic autotrophs within the biofilm. Sampling was performed at each site on three days over a two-week period in November 2018. Three sub-samples of biofilm were collected at each site, one from each edge of the creek and from the middle. Data indicates that a common genus of algae between the five sites was Closterium, while points further downstream had genera of cyanobacteria that were not as prevalent in the headwaters, such as Lyngbya. Initial analysis indicates that over the course of the study, photosynthetic organism populations were more greatly affected by temperature than bacterial populations. Statistical analysis is ongoing to determine whether there is significance between, or trends evident among, experimental parameters.