Living Boldly as a Muslim and a Marine: A Conversation with Mansoor Shams

Today in America it can be hard to talk about the things that divide us. As a Muslim and Marine Corps Veteran, Mansoor Shams knows this well and is on a mission to overcome division and hatred through dialogue.

At this Monday's Common Hour, he'll share what it's like to be an American Muslim and will answer questions about Islam in general, shariah, Islamophobia, jihad, the Muslim perspective on Christianity, Judaism, atheism, or even the recent confrontation with Iran. The sky is the limit for this talk; it’s a chance to ask the questions we are sometimes afraid to ask. 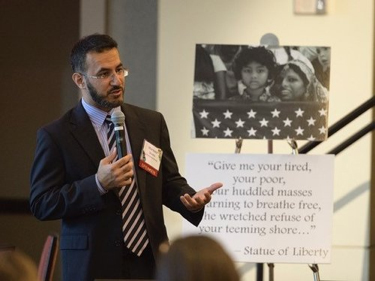 Mansoor Shams is a U.S. Marine Veteran, business owner, and a Member of the Council on Foreign Relations (CFR). He is also the founder of MuslimMarine.org where he uses his platform of both “Muslim" and “Marine" to counter hate, bigotry, and Islamophobia through education, conversation, and dialogue. He arduously endeavors to unify an increasingly divided world. The tagline for MuslimMarine.org is “unifying people through conversation."

Mansoor served four years in the U.S. Marine Corps, where he attained the rank of corporal (non-commissioned officer) and received several honors including a meritorious promotion, Marine of the Quarter and Certificate of Commendation.

He's been featured by PBS, NPR, BBC, Voice of America, New York Times, and more, and has made national TV appearances as a commentator on CNN and MSNBC. He has also delivered numerous talks and presentations to include at the National Security Agency (NSA), US Marine Corps, police and state government as well as at various colleges and universities across America.
Mansoor has also led various national initiatives including the 29/29 Ramadan Initiative where he teamed up with Veterans For American Ideals to have military veterans spend a night at the home of Muslim families across America during Ramadan to encourage fellow Americans to get out of there comfort zones to get to know each other. He also carried a simple sign across America (25 states to be exact), “I’m a Muslim and US Marine, ask anything” to engage the public in conversation and dialogue.

Mansoor holds a master's degree in government with an emphasis on national security studies as well as an MBA from Johns Hopkins University.
From 2005-2008, Mansoor began working for the federal government as an assistant to two SEC Chairmen