Whether she’s describing how to construct new plasmids for genetic research on chromatin folding or discussing how to synthesize the drug AZT with trivalent iron to improve its effectiveness at fighting liver cancer, Anna Harutyunyan ’17 impresses not only with complete command of her topic, but also with her boundless zest for research.

From an early age growing up in Yerevan, the Armenian capital, science fascinated Harutyunyan. “You could say it was genetic,” she said. Both her parents are engineers and many other family members are doctors and scientists. “I was the type of kid who was always interested in ‘how’ and ‘why.’ How things were made, how the universe came to be, why things worked the way they did. That was just the way my mind worked.” 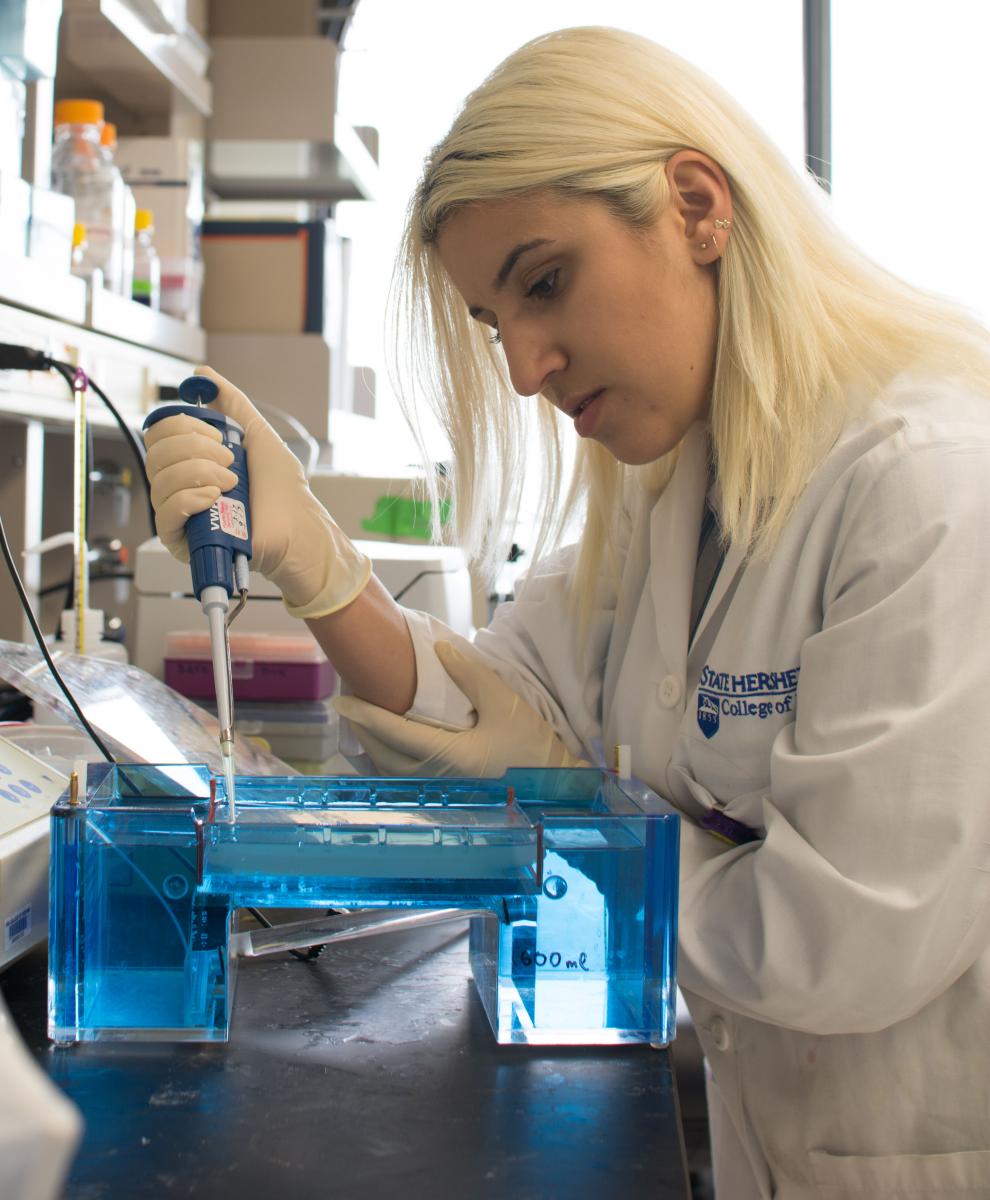 While majoring in both biology and chemistry at Wilson, Harutyunyan has honed her interest in research. “In science, you have to study, and the more you read, the more interested you become and the more you want to keep studying,” she said. “You realize how much you don’t understand and you want to find out more. That’s where research comes in.”

Harutyunyan’s proficiency in research impressed her Wilson instructors. “Her academic drive, passion for science and the discovery of the unknown, combined with her humble, engaging personality and sense of humor, is her formula for success,” said Dana Harriger, professor of biology.

This year, Harutyunyan was honored for her research in two different areas. Her internship at the Penn State College of Medicine at Hershey, where she participated in research on chromatin folding, led to her coauthoring a research paper published by the laboratory this spring. “Regulation of chromatin folding by conformational variations of nucleosome linker DNA” will be published by the scientific journal Nucleic Acids Research.

In addition, as Wilson’s Disert Scholar, Harutyunyan presented the results of her senior research at Wilson’s Student Research Day, as well as the annual meeting of the Pennsylvania Academy of Science (PAS). Her project, entitled “Synthesis and Effects of Fe-AZT on Viability of Human Hepatocytes and Hepatocellular Carcinoma Cells,” won a PAS Outstanding Research Grant.

Hepatocellular carcinoma (HCC), a type of liver cancer, is the third most common cause of cancer mortality around the world. Several studies have demonstrated that azidothymidine (AZT)—best known as the anti-HIV drug—can damage cancer cells, but the drug also has the side effect of damaging healthy cells.

Harutyunyan’s research combined AZT with trivalent iron (making a Fe-AZT complex) to determine if the new complex is more effective against HCC cells. “The key is to find that sweet spot, a concentration high enough to kill the cancer cells but not damage or alter the healthy cells,” Harutyunyan said. Preliminary results of her study showed that the Fe-AZT complex was toxic to malignant cells, while not harming healthy ones.

Elissa Heil, Wilson’s vice president for academic affairs, praised Harutyunyan for her sophisticated research and her poise while presenting during Student Research Day and PAS. “Anna has been such a wonderful addition to the student body. Her engaging personality and wit combine with a rare maturity to inform her campus collaborations,” Heil said. “She manages to balance a confident professionalism with healthy humility. There is no doubt that an alumna like Anna has the power to change the world.”

When she was a high school student and the time came to pick a college, Harutyunyan said she was determined to begin her dream of becoming a world traveler, and chose Wilson when she was awarded the Bogigian Scholarship. Established from the estate of Hagop Bogigian, an early Wilson benefactor, this full-tuition scholarship is awarded to female students of Armenian descent, with a preference for citizens of Armenia. 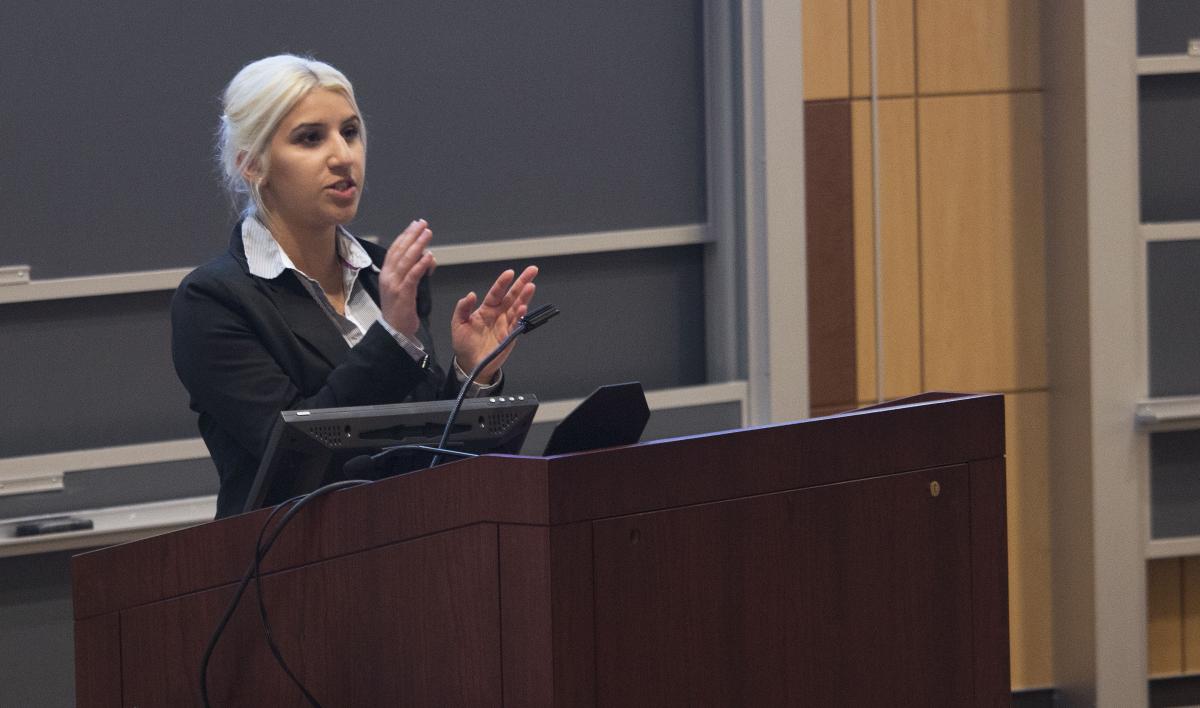 She described Armenia as being “very traditional” when comes to women’s roles. “People would tell me, ‘No, you can’t do that because you’re a girl,’ and I’d say, ‘No, I can do that because I am me.’” Wilson’s tradition of women-centered education intrigued Harutyunyan. “I am very happy that I came to Wilson,” she said. “I feel that I finally found a place where no matter what I said, it will be accepted. Wilson has a reputation for cultivating strong, independent women and I feel I have found myself.”

Her Armenian heritage remains a point of pride. “There are not that many Armenians in the world)—only about 3 million in my country, due to the genocide of 1915,” she said. “I want to keep my name no matter what happens, so that whoever reads my publications will know that here is an Armenian. My name is very important to me and I will never let it go.”

Her internship at the Penn State College of Medicine laboratory in Hershey, Pa., last summer turned into a part-time job this year, and she was able to continue research on chromatin folding. After graduation, Harutyunyan landed a research job at the California Institute of Technology.

“I want to contribute something that will help to understand what causes a disease and how to combat it,” she said. “I would like to be a role model to encourage more women who study science to go into research.”