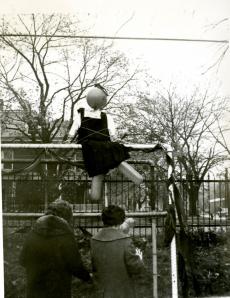 Held at the beginning of the fall semester, Sarah Wilson Week incorporates many of Wilson’s longest-running traditions. All students are invited to participate in the events regardless of class year, although some of the Week’s activities are specifically geared towards introducing the new freshmen to Wilson’s traditions.

During Sarah Wilson Week, each freshmen student is assigned a “Sophomore Buddy” and a “Big” (Junior) to foster unity between the classes. The Buddies and Bigs give presents and clues to the freshmen before finally revealing themselves during the week’s events.  Each day of the week revolves around different activities, some of which are kept secret. Monday is “Pirates and Ninjas Day”. Evens are ninjas, and odds are pirates. In the evening, the sophomores lead the freshmen around campus to sing in front of various buildings and the senior class. On Tuesday, freshmen receive their “dinks” or beanies. This is followed by the traditional Color Ceremony, and seniors take the freshmen to the main green to celebrate with a candle arrangement in the shape of a “W” and present the freshmen with their class banner. Thursday marks the beginning of banner stealing. Each class hides their banner and gives clues to its whereabouts to the other classes. Banner stealing wraps up on Friday and there is a Color War on the green to show support for your Odds or Evens’ colors. 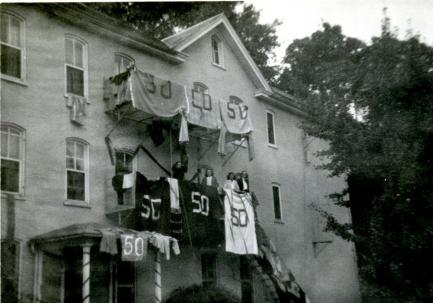 In 1989, the tradition of painting names in class colors on the lamppost on the green began. Now it is typically decorated in the colors of that year’s graduating class.

Before Sarah Wilson Week, there was Dummy Rush.  Dummy Rush involved many of the same activities, but also included its namesake event – a hunt for each class’ “dummy”. The September 1931 Billboard describes it: “Another exciting event which carries with it an amusing tradition is the Freshman-Sophomore hockey game. Before this game takes place, each class prepares a “dummy,” and wild excitement ensues on the evening before the game, when each class tries to find and “rush” the dummy of the other class. Usually, however, they are unsuccessful, and the dummies are brought triumphantly on the field next day”.