The Stars and Stripes Flies High Over Wilson 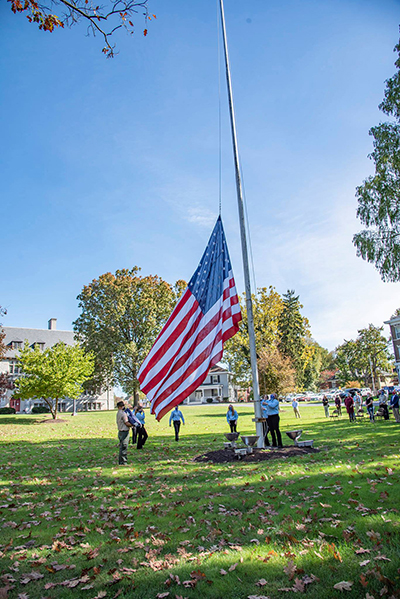 In a solemn ceremony on a beautiful fall day, members of the Wilson community retired the old Stars and Stripes, which had flown proudly over the Main Green for many years, and replaced it with a new one.

The ceremony was organized by Dawson Zalegowski, a VMT and pre-vet major and resident assistant (RA), who has been living on campus on the top floor of South Hall. From his window, he has an unobstructed view of the green and had noticed that the old flag had become a little weather-worn. As a former boy scout, he knew the symbolic importance of retiring a Stars and Stripes correctly and with the respect it is due.

Zalegowski approached the administration about hosting a formal retirement and replacement of the flag. Cassandra Latimer, Vice President for Marketing and Communications, enthusiastically supported the project. While Latimer took responsibility for purchasing a replacement and procuring the appropriate music for the occasion, Zalegowski set about recruiting participants.

“The people I asked to help were very excited,” Zalegowski recalls. He recruited three fellow RAs and two members of WCGA to form the color guard. Rev. Derek Wadlington volunteered to call out the commands at the ceremony. Prof. Dana Harriger, representing Boy Scouts of America Troop #136, agreed to take charge of the retired flag and decommission it correctly.

gainst the backdrop of the autumnal foliage, with an audience of students, community, and staff, including Wilson President Wesley R. Fugate and cabinet members, Wadlington gave a short speech on the history of the Stars and Stripes. He then called the color guard to order. They honored the colors by reciting the Pledge of Allegiance together. Then, to the bugle call of “Retreat,” they lowered the flag, folded it into the ceremonial triangle, and presented it to Harriger.

The color guard, with Wadlington calling out commands, ceremonially unfolded the new Stars and Stripes and raised it to the bugle call of “To the Colors.” The ceremony ended with the 15’x25’ flag fluttering in the gentle breeze high over the College and Chambersburg.