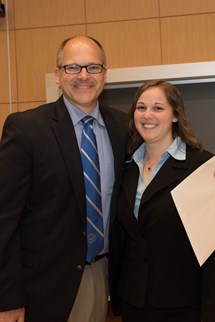 James Applegate Award, which is awarded to a student with an interest in drama and theater, went to two students: Annika Dowd of Chambersburg and Ghada Tafesh of Gaza, Palestinian Territories.

Lucy Bremmer Global Citizenship Award, awarded to a student who participates in the service learning component of Wilson’s global citizenship initiative, was given to Katelyn Wingerd of Orrtanna, Pa. Wingerd also received the Josef Michael Kellinger German or Foreign Language Award for a student who has demonstrated excellence in German or foreign language studies; and the Margaret Strode Haines Award, which recognizes a student with outstanding qualities of scholarship, interest in the humanities and strength of body, mind and spirit.

Alice Martin Brumbaugh Award in Sociology, which is given to a female student who has entered the college at a non-traditional age and shows a special interest and/or outstanding promise in the field of sociology, was awarded to Stacy Hess of Chambersburg.

CRC Press General Chemistry Achievement Award was given to Gaser Ahmed of Chambersburg.

Marel Harlow Cheng Memorial Prize, awarded to a student who has done well in international studies or has made some noticeable contributions to international understanding, went to Christina Gonzalez of Santa Barbara, Calif.

Regina Shaputnic Cuomo Mathematics Award, given to a student who is majoring and shows outstanding ability in mathematics, was awarded to Jennifer Skinner of Waynesboro, Pa.

Mildred Franklin Prize, given to a senior for excellence in classical languages, was awarded to Tia Shearer of South Mountain, Pa.

Davison Greenawalt Grove Award for a student participating in research in physical and life sciences was given to Jessica Meck of Huntingdon, Pa.

Dorle Haas Memorial Prize, awarded to a senior for outstanding service within the greater Chambersburg area, went to Taylor Staudt of Robesonia, Pa.

Gloria Randle Scott-Frances Richards Hesselbein Prize, awarded to the senior who has demonstrated outstanding volunteer service during their four years at Wilson College, was given to Sonja Hess of Bolton Landing, N.Y.

Joanne Harrison Hopkins Literary Achievement Award, given for the finest piece of imaginative literature in fiction, poetry or drama produced during the academic year, went to Caitlyn Minelli of Beverly, Mass.

Catherine Herr Langdon Award, given to a senior who has demonstrated academic excellence and has gien encouragement and guidance to fellow students during the year, went to Nicole Melanson of Hyannis, Mass.

Mary-Eleanor Maule Travel Grant, awarded to graduating seniors or students entering their junior or senior years for travel planned in support of study in Spanish, was given to Netha Kane of Chambersburg.

Alta Lindsay McElwain Prize, awarded to the best student in Latin or Greek in the freshman class, went to Haley Hutchinson of Acme, Pa.

Helen Adams Nutting History Prize, awarded to a member of the junior or senior class who has demonstrated outstanding ability in the field of history, went to Nicole Trusky of Chambersburg.

Organic Chemistry Award, given to the student in organic chemistry who earned the highest grades for the year, went to Nicole Bodulow of Perkasie, Pa.

Outstanding Peer Teacher Award, given to honor exemplary service as a First-Year Seminar peer teacher for the year, went to Danniele Fulmer of Clymer, Pa.

Nicky Hoffman Reich Award, given to the student whose work with animals shows commitment to humane treatment, was awarded to Danielle Boock of Chambersburg.

John D. Rose Award in Environmental Studies, given to an outstanding junior majoring in environmental studies or biology to fund a summer research project or internship, went to Sadie Repp of Mercersburg, Pa.

William and Ivy Saylor Prize, established through the Academy of American Poets to support young poets at colleges nationwide, was awarded to Darah Wolf of Chambersburg.

Grace Tyson Schlichter Award in Communications, which is given to a senior who has shown general academic excellence and outstanding promise for a career in a field of communications, was given to Carol Zehosky of Shippensburg, Pa., and Shoshana Rudski of Allentown, Pa.

Mary Beers Sheppard Prize, awarded to the member of the senior class who has shown the keenest understanding and appreciation of literature, was given to Jennifer Dodds of Hagerstown, Md.

Joan M. Thuebel ’52 Earthwatch Prize, which sponsors a student to participate in an Earthwatch Institute project of his or her choosing, was awarded to Jessica Larkin of Carlisle, Pa.

William P. Van Looy Business Prize, awarded to the junior or senior business and economics major who has demonstrated excellence in business studies and in service to the well-being of both the Wilson College and larger community, went to Han Yan of Wuhan, China

E. Grace White Prize, awarded to a senior whose major field is biology or biochemistry and who has demonstrated outstanding achievement and plans a career involving the biological sciences, went to Kotchaphorn Mangkalaphiban of Chiangmai, Thailand.

E. Grace White Summer Scholarship, which is given to an outstanding junior in biology for use at approved laboratories, went to Amadea Clement of Bowie, Md., and Ghada Tafesh of Gaza, Palestinian Territories.

Wilson College Education Award is awarded to one elementary education major and a student preparing for teacher certification in a secondary school level who have shown outstanding achievement in both their academic studies and in their professional preparation. Jennifer Isaac of Biglerville, Pa., won the secondary award and Nathanael Stump of New Bloomfield, Pa., received the early childhood award.

Wilson Equestrienne Award, given to a graduating senior who has excelled in academics and equitation, went to Marissa Kosko-Blyler of Hollidaysburg, Pa.

Wilson College Fine Arts Prize, given to a graduating senior for outstanding achievement in both art history and studio art, was awarded to Jessika Glass Dockery of Chambersburg.

Carolyn Zeleny Prize, which goes to a sociology student in the junior or senior class on the basis of academic excellence and/or community service, went to Heather Humwood of Chambersburg.

Wilson College Scholar Athletes, those who have maintained a grade-point average of 3.4 or higher and participated in at least one Wilson varsity athletic team, are: Nicole Bodulow of Perkasie, Pa.; Nicole Melanson of Hyannis, Mass.; Emma Miller of Salisbury, Md.; Brittney Poff of Red Lion, Pa.; Lily Rembold of Franklin, Pa.; and Katelyn Wingerd of Orrtanna, Pa.