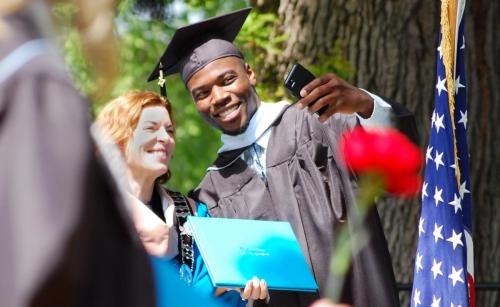 Condon, who will receive an honorary degree from the college, was named “Audience Favorite—New York” on NBC’s Last Comic Standing, won the nationwide “Ladies of Laughter” contest and appears in theaters around the country with the “Ladies of Laughter: Funny and Fabulous” tour. Her commencement address is entitled, “What I’ve Learned from Comedy.”

This year, approximately 101 students will receive bachelor’s and associate degrees during Wilson’s commencement ceremony, which will be held outside on the college’s main green. (In case of rain, the ceremony will be held in Laird Hall.) For the first time, more graduate students will receive degrees than bachelor’s and associate degree students, with approximately 113 graduates of Wilson’s master’s degree programs in accountancy, education, educational technology, humanities, fine arts and nursing earning their degrees.

During the commencement ceremony, philanthropist Marguerite Brooks Lenfest of Huntingdon Valley, Pa.—a 1955 Wilson graduate, former college trustee and, with husband Gerry, generous donor to her alma mater—will be recognized in absentia with trustee emerita status, the highest honor a college can bestow on a trustee. Lenfest, who is unable to attend commencement, was honored at an event held April 25 at Longwood Gardens.

Faculty emeritus status will be conferred on Wilson Associate Professor of Computer Science Donald Kelley, who is retiring after many years of service. Emeriti status is the highest honor that can be bestowed on former faculty members and is reserved for those whose service has been extraordinary.

A baccalaureate service will be held at 4:30 p.m. on Saturday, May 12, in Alumnae Chapel at Thomson Hall.

Condon began her career as a journalist for Fortune and Life magazines. While living in Tokyo, she wrote the 1985 bestselling book, A Half Step Behind: Japanese Women of the ’80s, which sold out in Japan. It was during speaking engagements for the book, when Condon would make the audience laugh, that her new career as a comedian was born.

Dubbed “an uppercrust Roseanne” by the Associated Press, Condon has appeared on television programs such as ABC’s The View, Lifetime’s Girls’ Night Out and NBC’s Today Show. She was named one of “10 Comedy Best Bests” in the annual comedy issue of Backstage.

Condon graduated from Wellesley College in 1973 with a Bachelor of Arts degree in political science and later earned a Master of Education in children’s television from Harvard University’s Graduate School of Education.