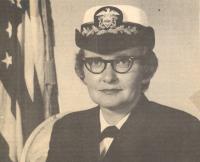 Captain Joan R. Hankey ‘59 joined the US Navy three days after graduating from Wilson. She earned a Master’s in Computer Systems Management from the US Naval Postgraduate School in Monterey CA. She directed one of the Navy’s largest computer operations centers. Joan was the first woman executive officer of a Navy command not involved with administration of women, and the first woman officer named as assistant for automation for the organization of the Joint Chiefs of Staff. When she was promoted to Captain, Joan was one of only 17 women Navy captains outside the Nurse Corps. She was awarded the Navy Commendation Medal for outstanding service.

The Hankey Center, named in honor of Joan Hankey, USN (retired) ’59, and her family, was dedicated on June 7, 2003, to house the C. Elizabeth Boyd ’33 Archives and the Barron Blewett Hunnicutt Classics Gallery. 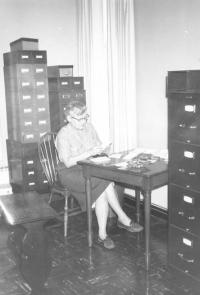 C. Elizabeth Boyd ’33 A dedicated graduate of Wilson College, Miss Boyd (1911-2002) served the College in a variety of ways, most notably as registrar from 1956 to 1971. After her retirement in 1971, she was granted emeritus status for her exemplary service.

As registrar, she worked closely with College records and understood their value. From 1979 to 1994 she served as volunteer archivist, working determinedly to prevent the destruction and loss of records. In addition, she encouraged alumnae and other College friends to donate Wilson-related materials. Because of her efforts, the Archives has been able to preserve the institutional memory of the College through official College records, personal papers, audio-visual materials, photographs, scrapbooks and memorabilia.

The History of an Idea